You are here: Home / Book Release / A Wicked Hunger Cover Reveal and Excerpt

Finally, after many scrapped and amended designs, I’m ready to reveal the cover for A Wicked Hunger: book 1 in my Creatures of Darkness series. This series will follow Coraline Conwell as she discovers her past is not exactly what she thought, and her future is terribly uncertain.

Below is a short excerpt to whet your appetite. 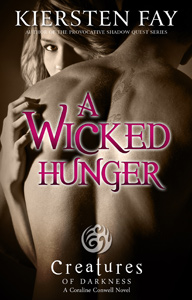 Humans had once thought of vampires as cold, undead creatures, who required blood to survive. Mason was anything but cold. The warmth of his body seeped into her back. She could feel his pulse as well, noticeably slower than her own—adrenaline still spiked wildly in her veins.

No. Vampires were flesh and blood, same as humans, whether evolved or otherworldly was debatable, but definitely top of the food chain.

Currently, she was on the bottom, right underneath krill.

As for needing blood to survive? That part was all too true.

As Cora lay there, immersed in one of her greatest nightmares, she evaluated the end of her life as she knew it. Mace now knew she could not be compelled by him or, as far as she could tell, any other vampire. She could not be made to forget him, the location of wherever it was he intended on taking her, or this whole illegal vampire blood business, for that matter.

She’d been inclined to hope for a swift and immediate death when this fiasco was over, but now…? Now he would claim her, take her to his clan and demand to keep her, just as Edgar had.

For the sole purpose of being cruel, Edgar had explained in gory detail what happened to lone humans amongst vampires. And it all started with a bite.

Well, Mace had bitten her…