You are here: Home / romance / Social Media for Authors 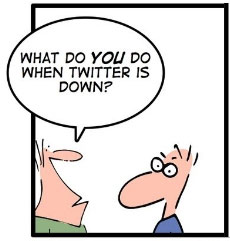 The Internet is a massive place, and readers can be found every which way. Some of the most popular places authors tread—myself included—is Twitter and Facebook. There are other great places to promote, but for me, these are probably the most used. Actually, mostly Twitter, even though in the beginning I remember saying, “Twitter? What a ridiculous concept.” Meanwhile, I’m still addicted.

There are some potential pitfalls, however.
For authors, these social media platforms are used for marketing. Marketing is important, but it takes time away from what we’re all supposed to be doing, which is writing. And it is super easy to get sucked into Twitter, Facebook, Youtube, and now Pinterest has its claws into me, LOL.

Aside from that, their true purpose (being social) all too often gets overlooked. So what you get is an author that only posts about his or her books, and little else. I’m guilty of doing this myself, though I try not to do it too much. However, I notice some folks on twitter who practice this as if it were some kind of religion, and it saddens me because what they’re actually doing is burning up their following. People don’t want to be sold to all the time and will just stop listening if you don’t have anything of interest to say. Bottom line, the point of social media is social interaction.

On the other hand—and forgive me for spinning your head in the opposite direction—if writing is your business (and for most authors, that’s our goal) then all these social media sites have to be looked at as business tools, which means they should be used as business tools. This doesn’t mean I’m telling you to forget everything I just said above. People who use social media correctly still promote themselves. They just don’t do it all the time every time. There is a balance to it all, trust me. I’m not sure if I’ve found it, but I know it’s there.

So what is your preferred social media outlet?