You are here: Home / romance / An Excerpt from Demon Untamed 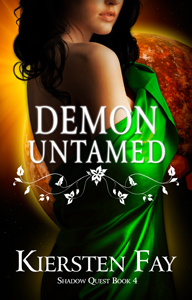 Sonya stood to face him. His expression displayed a mix of irritation and amusement. “I know the concept of a hard day’s work is difficult for you to understand, pirate, and you’re functioning on a damaged moral compass—”

“My moral compass may be damaged, but at least I’m not a slave to my baser needs.”

She stilled. “And you’re saying I am.”

“You are a demon after all. Your kind are notorious for their debauchee and barbarous natures.”

She choked out a laugh, “My people are barbarous?”

“And this coming from a pirate.”

“You know nothing of it!” he snapped.

“And you know nothing of me!”

“I know more than you think. And even if I didn’t, I had you pegged purely by the manner in which you dress yourself.”

That gave her pause and she resisted the urge to look down at herself. Her outfit was no more revealing than any other female on the ship. In fact, compared to some, she could be considered downright modest. Her skirts, she had to admit, were on the short side, but that was only to accommodate her tail, and nobody had ever commented on it before. Not that it mattered what anyone else thought of her, especially not some hypocritical pirate.

“Get out of my pub before I smash your face into the wall,” she hissed.

Instead, he took a step closer, goading her. Something in that action fired her blood in a way she’d never felt, and the pace of her heart increased with a surge of excitement. Sonya was used to people backing down when she issued a threat, they never willingly opened themselves up for attack.

She tilted her head at him with renewed interest.

This website uses cookies to improve your experience while you navigate through the website. Out of these, the cookies that are categorized as necessary are stored on your browser as they are essential for the working of basic functionalities of the website. We also use third-party cookies that help us analyze and understand how you use this website. These cookies will be stored in your browser only with your consent. You also have the option to opt-out of these cookies. But opting out of some of these cookies may affect your browsing experience.
Necessary Always Enabled

Any cookies that may not be particularly necessary for the website to function and is used specifically to collect user personal data via analytics, ads, other embedded contents are termed as non-necessary cookies. It is mandatory to procure user consent prior to running these cookies on your website.